Once in awhile, I like to take a shot at doing some of my favorite characters. One of my all-time favorite children's illustrators is Lane Smith. One of his books is called The Stinky Cheese Man and Other Fairly Stupid Tales. Wikipedia describes the book as such:


The Stinky Cheese Man and Fairly Stupid Tales is a postmodern children's book by Jon Scieszka. Published in 1992 by Viking, it is a collection of twisted, humorous parodies of famous children's stories and fairy tales, such as "Little Red Riding Hood", "The Ugly Duckling" and "The Gingerbread Man". Illustrated in a unique style by Lane Smith, the book won the New York Times Best Illustrated Book award, was a Caldecott Honor book, and has won numerous other awards in various countries.
The book has proved to be popular with children and adults, as its lighthearted approach creates interest while educating young readers about some of the features of books (such as title and contents) by poking fun at those conventions.

-He designs the book along with his wife, Molly Leach, who does the layout/typography. She is amazing... Here is a YouTube video of them discussing some of their books:

...And here is his site: Lane Smith Books

I really wanted to do a painting of the main character, who tries to entice everyone to chase him. Nobody does, however, because he stinks so bad.


I tried giving it an energetic background, and tried using some salt to add texture to the watercolor. I probably need to use bigger rock salt, because I did get a texture, but I wanted a little more....


I also tried to make the lines in the back give the feeling like odor was just coming off him in droves. I wasn't sure what kind of color to give him. I always thought a "Blue Cheese Man" would be interesting... but I went with orange-ish hues. 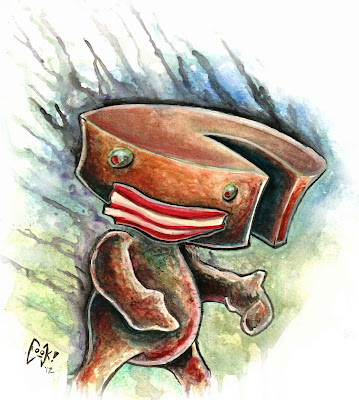 A man made of cheese, who stinks really bad. I love this kind of stuff!
All said and done, maybe 4 hours or so.
Posted by Joel Cook at 11:39 AM 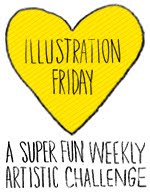